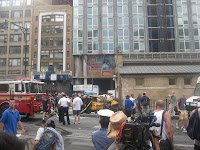 I just witnessed the aftermath of a very serious car accident involving a taxi cab around the corner from my office.

In addition to my initial concern for the driver, passengers and pedestrians involved in the collision I was also taken with the reaction from the witnesses standing around the crash.

A few kept their heads down and pushed through the crowd to continue with their day.

Some of them whipped out their cell phones and cameras and began documenting it for, I imagine, blogs, status updates (Facebook and Twitter and others) and the local and national media sources.

Whenever something happens as suddenly and unexpectedly as a car crash, the people involved see the cause and effect differently.

Take a moment to consider what that moment in your own story is. It doesn’t have to be as dramatic as a car crash, it could just be an argument between two people, a missed appointment or hearing from an old friend. But consider how that event is perceived by the characters in your story and how it changes them.

I hope this story has a happy ending for everyone involved.