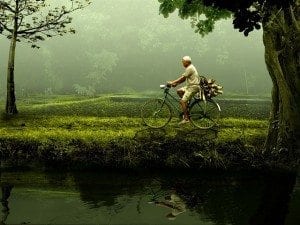 This week has been a whirlwind! In addition to teaching and working on my new book, I agreed to write a film treatment about an amazing woman in the Arab world. The story spans her life from birth to the present and is far bigger in scope than is normally contained in a two-hour movie.

The good news is that the project already has financing; the bad news is that the treatment must be submitted by July 31st. So I have to move fast, and efficiently. In order to meet the deadline, I realize I will have to revisit my NYU textbook, The Four Magic Questions of Screenwriting in order to successfully organize all the diverse elements of the story.

I am proud that I was able to build a better mousetrap: the 4MQS is a foolproof way to design a better story fast. This is because it teaches the writer to reimagine screenplays as having not the classic three-act structure we are all so familiar with but rather four sections of roughly equal length. Each of these sections should be organized to answer one of the 4 Magic Questions, which collectively add up to a complete version of the story you are trying to tell.

The 4 Magic Questions, in order, are:

My first step was to ask my student to write out a chronological list of the most important events in her life. Once I had this list—it was quite long, by the way—I was able to use the 4MQS like a cookie cutter and take the “dough” of her story and begin to sort the events in a way that was both dramatic and brief.

I began by asking myself the first question: What is the main character’s dream? The answer was: She wants to be independent and help other women achieve the same.  By focusing on the main character’s dream, I easily saw where the story must begin.  What was the pivotal event that gave the heroine the desire to become a teacher?  Or was it a series of events? When did she first get a chance to act on her dream? What was the first step that she took? I always know that, once I find the beginning, organizing the other pieces comes easily.

In this story, the main character’s dream is to achieve her goal of an education. Therefore, I know that Act 1 will require me to find the events that best communicate that goal as well as the obstacles that may prevent her achieving it. Characters must never be one-dimensional, so I look over the material to see what other elements of the story should be factored in. The first one is clear: the repressive society in which the story takes place, and the cultural morays that make it nearly impossible for a woman to have any personal freedom. I must also dramatize the cruel behaviors that members of her family exhibited towards her so that we fully understand what she had to overcome. Once I have decided on the five to ten events that the first act can accommodate to illustrate her dream and her hopes of achieving them, I can move on to Act 2, Part 1.

The second Magic Question is:  What is my main character’s nightmare? In order to answer this question and structure this part of the film, I must identify and activate all of the existing and new obstacles that might prevent her from achieving her goal. The typical areas would be her relationships with her mother, husband, brothers, daughters, and authority figures. I will consult the woman’s list and try to infer what the appropriate events would be. I will then organize them so that we reach the end of the section with some sort of “cliffhanger”—something that will cause a further complication in Act 2, Part 2. This is a lot easier when you are creating a fictional story. In a real life story such as this, I must massage what actually happened.

In Act 2, Part 2, I know I must raise the stakes so that the main character’s choices are “life of death.” The question for this section is: Who or what would my character die for? This is often the hardest part of a story to structure because it doesn’t directly follow the events of Act 2, Part 1. For instance, this is where a crime story often changes into a love story, where a comedy can become tragic, or a drama can become a crime story. This section is where the main character goes through a fiery crucible so that he or she can be transformed into the new self that can at last attain and keep her goal.

Finally, in Act 3, I must answer the question of whether of not the character ultimately attains her goal. This is fairly straightforward, but I must be careful that all of the secondary characters my heroine has interacted with have a resolution of their own. For example, in this story, the difficult relationship with the mother has to be resolved.

To recap, by using the 4MQS, it’s easy to figure out how to structure and organize any story fast. I can only hope I have such clarity in my own work!

Here’s to your happy and successful writing,