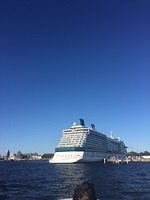 I’ve just returned from a wonderful Celebrity cruise to Alaska hosted by Abraham-Hicks, spearheaded by Esther Hicks. I have attended several seminars, and this is my second cruise.

Esther and her late husband, Jerry, have held many seminars in which a member of the audience is called onstage to the “Hot Seat,” in order to ask a burning question about the problem they’re having.  Getting called up is considered a triumph and many aspire to this honor. My friends have all been asked on stage, so when I arrived on the ship, I was feeling apprehensive, and worried that I wouldn’t get my chance.

When the boat stopped in Ketchikan, we got off and went shopping. I went into a little store, and there was Esther, wearing a baseball cap, shopping the same scarves as me.  We exchanged a glance, and she smiled at me.

Heartened, I said, “Hi Esther, I’ve been following you for years, and my life is very happy. Thank you.” “You’re welcome.”

I gathered my courage and asked, “So how did you meet Jerry?”

“Through a mutual friend.”

And that’s how I met my wonderful guy, who I have been considering as a life partner. This was an affirmation that I had indeed met “the One.” Thrilled, I asked, “Can I hug you?” She nodded and we did.

But, I was never called on during the seminars, and felt a bit put out. When I came home and told my beau the story, he laughed and commented, “ You don’t see it, but you had a private audience with Esther and got your question answered. Who gets that? “I laughed ruefully because in spite of all the positive thinking I’ve been exposed to, I was still telling a sad not a happy story!!

Back in the beginning, Jerry was the one who encouraged Esther to connect with Abraham, and I’m writing an animated series thanks to mine, as well as being much more self-confident and happy. Talk about a confirmation!!

Esther and Jerry wrote a wonderful book, Ask And It’s Given, which has many techniques for feeling better about your life, which then allows more happiness to actually appear in your life. This is very powerful material, and helpful for us writers.

There is still time to complete your screenplay this summer!

My book, How to Write a Screenplay in 10 Weeks will show you how to turn your great idea into the first draft of a screenplay in just 10 weeks!

Using the Horowitz System, you will get step by step guidance in completing a first draft with structure, clear vision and memorable characters.