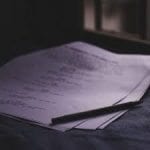 One of the most common problems I encounter in my writing-guidance work is the confusion writers have about the differences between screenplay and novel writing. Here are three suggestions that will help you write a better screenplay.

A screenplay is only one step toward a film, while a work of fiction or non-fiction is an end unto itself. A book is the final result of a writer’s labor, ready to be delivered to its audience, whereas a screenplay exists solely to be transformed into a movie, and only at that point is the story ready to be presented to the public. Therefore, a screenwriter must always remember to use his or her words as simply and cleanly as possible, as if they are directions on a package, setting the stage for the filmmakers and actors to bring out the deeper nuances of the story. A novelist, on the other hand, uses the words themselves to create atmosphere, subtext, and mood, to describe characters’ thought and behaviors, and to offer up metaphor and simile. This is not to say that a screenplay can’t be well written, and surely there are scripts that are beautifully crafted documents. (Among my personal favorites are Chinatown, Alien, and The Godfather. But a screenwriter must always limit the description to what is seen and heard. A novelist can describe how someone feels: “It was as if he had been slapped when she said good-bye.” In a screenplay, we may need to see her whack him.

2.  What are your descriptive intentions?

In fiction, allusions to songs and poems are allowed as long as the source is cited. For example, in fiction you can use the words of a song or cite it by name as long as you acknowledge the source. But in a screenplay, there is the issue of the high cost of obtaining the rights to use the actual song in the film.  So in fiction you could write, “She was humming along to ‘Jamming’ by Bob Marley as she washed the dishes,” but when you want to use the lyrics of a song in a script, you would write, “She hums along to a bouncy reggae song.”  A screenplay must be considered as a map leading somewhere else.  Further, too much description limits a producer in what he or she can imagine, whereas in a book you need to paint a fuller picture.

3.  Who will be reading your script, and why are they reading it?

At best, it’s someone who can help turn your script into a film. This is very different than a person who is reading a book for enjoyment or to learn something. Your primary audience as a screenwriter is always an agent or a producer—even if in practice it’s an assistant who has been asked to access the viability of your script before his or her boss decides to take a look.  The considerations for a screenplay include a great story, living characters, great dialogue, market viability and all things that are also considered in a book. However, a film must be produced. It costs the same to print a drama or sci-fi novel, but producing a drama or sci-fi film costs quite deal more. Remember, it’s called the movie business for a reason.

As you can see, there are differences in the two forms that must be addressed in order to achieve success. Know why you are writing, who you are writing for, and be aware of how your words will be received by your target audience. I always suggest that my fiction and nonfiction students read screenplays to learn the art of using words to describe physical action, and that my screenwriting students read fiction to learn about subtext. There is much to be learned from both disciplines.