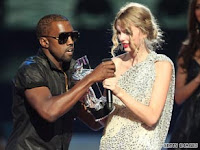 There’s nothing worse than stealing someone’s thunder and what Kanye West did to Taylor Swift was completely inexcusable.

I’m sure Beyonce, who consistently presents herself as a class act, was completely shocked by Kanye’s outrageous attack on a talented musician. I find it particularly interesting that he would do that to someone who won fair-and-square in a system whose approval Kanye seems so desperate for.

I took a moment to consider what can be learned from Kanye’s shocking behavior.

Quite often outrageous behavior is just what we need when we write our movie scripts, as a shock to the system is just the thing to improve a passive character and set the drama in motion.

Since the incident, Taylor has been introduced to a whole new audience, Beyonce has received kudos for her classy behavior and Kanye took some time to reexamine his behavior on what I imagine was a highly-rated first episode of The Jay Leno Show last night.

Consider the movie High Fidelity for a moment. During most of the film, John Cusack’s character Rob Gordon relives his Top 5 worst breakups but it is only when he is caught off guard by his latest breakup that he begins to reminisce.

As an exercise, think about the main character in your own script. If you feel they are not active enough, what shocking event could you create to help them claim their dream? How will this event also affect your other characters?

You might be surprised that even if you are working with a very complex plot, how important that one original shock really is.