This was the week of the 9/11 tragedies. I asked some of my students where they were when it happened. Whatever the specific details, everyone was affected even if they were in a foreign country. No one escaped the horror.  I give thanks to all the people who rose to help contain the disaster. 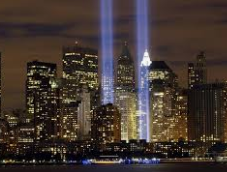 I was home watching New York 1 and saw the plane hit the second tower. The sound was off, and for a moment, I thought I was watching a trailer for a new action movie, and that it was in very poor taste. I went back to work.

A few minutes later, my father called to tell me that my uncle had narrowly escaped death as he raced for a meeting at the top of Tower 1.  My uncle is a banker who’d never been late to work in his life. If his secretary had been there, he would have made the meeting on time, and died.  She was out sick, and the temp didn’t know the way to the elevators, and got them lost.  By the time she figured it out, my uncle had just put one foot into the elevator when the first plane hit! They both survived.   After that, I stopped being annoyed if people were late!

If my father were still alive, September 11 would have been his birthday. He died nine years ago, and I think of him fondly almost every day. I loved him dearly, and still do.

If I were going to combine the 911 tragedy, and my father’s birthday in a scene, I could generate a lot of conflict, by having one character terribly sad about having lost their father in the tragedy and the other sad about the loss of their father for other reasons.  The way I’d develop this scene would be to use this exercise:

To recap, using your own experiences can help to create powerful and authentic imaginary ones.