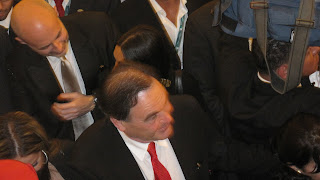 En route to Rome for the second leg of my trip.

I saw seven films in all at this year’s Venice Film Festival! Seeing a terrific selection of films with an international audience, in a huge theater, steps away from the incredible Lido beach, made the impact of these films even more powerful.

Here are some of my notes:

Michael Moore’s Capitalism: A Love Story was stunning both in execution and content. He clearly exposes how Big Business has used creating debt as a tool to drain the American economy and turn its citizens into Matrix-like copper top batteries that are routinely drained of all monetary resources and then tossed aside, bankrupt and homeless. The most shocking detail was the practice of taking out insurance policies that predict when the workers will die! The documents refer to the workers as “peasants,” which I guess summarizes the feeling “they” have about “us.” I felt like I was watching the documentary version of They Live, a favorite horror movie where the use of sunglasses shows us the true face of the evil folks that run the world we think we know. 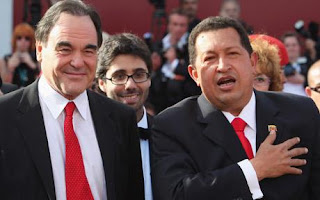 The following evening I saw Oliver Stone’s new documentary about Hugo Chavez and Latin America, South of The Border, which seemed to be a companion piece to Moore’s film, as it applauded the rise of a triumvirate of South American leaders who have successfully resisted The International Montetary Fund. All the more interesting, Hugo Chavez was in attendance for the screening.

The most incredible interview in the film was one where it was revealed that President Bush had said that war was the best way to stimulate an economy! I found this a terrifying confirmation of something I intuitively have always understood about business — that every world problem made by humans that has seemed incomprehensible could, in fact, be traced to a way for someone to make money! To paraphrase Sherlock Holmes,” If you eliminate the impossible, then what remains, however improbable — must be the truth!”

One of the tricks I teach my students is to follow this principle when plotting. No matter what you think up as a plot device, consider who stands to profit from the event, and you will open yourself to a whole new level of storytelling! 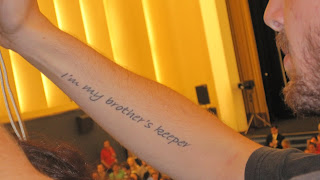 After the film, the audience thronged around Stone and Chavez, who made an impromptu and amazing speech (which I didn’t understand but deciphered using the audience reactions). The man beside me held up his arms to get a photo, and had a tattoo that said, “I am my brother’s keeper. I could not have written a better moment in a screenplay.

As I left three people were discussing the film in heavily accented English. One said, “One thing about the Americans is that they show no embarrassment about shooting their own feet and putting it up on the screen. They all have so much confidence.”

Speaking of triumvirates, I also saw Soderbergh’s The Informnant, about an American sociopath who informs on international price fixing as a good citizen, but doesn’t make the connection that taking kickbacks totaling 9-11 million was illegal. The film is a further commentary on the distortion that has turned capitalism in an evil empire that feels a lot like the one in Star Wars, but with several candidates for the roles of The Emperor and Darth Vader.