Back in the day, the Rialto area in Venice was as important to world commerce as Wall Street. The photo shows the front of the building that was the first bank. The bankers would sit outside at wooden tables and trade back and forth. If one of them lost everything, his table would be broken, and he would be described as being bankrupt.

Michael Quinion of World Wide Words writes, “The word actually comes from Italian banca rotta, a broken bench (not a rotten one, as the false friend of Italian rotta might suggest — it’s from Latin rumpere, to break). The bench was a literal one, however: It was the usual Italian word for a money dealer’s table (and indeed is the origin of our word “bank” for a financial institution and also for the sense of “break” in phrases like “He’s gone broke”). In his dictionary, the great Dr. Johnson retold the legend that when an Italian money trader became insolvent, his table was broken. But the Italian word was being used figuratively — it could also mean “shipwrecked” or “defeated”, for example.”

A thank you to Michael!

Why did this come to mind? Perhaps because there’s so much great shopping in Venice, it would be easy to go broke. 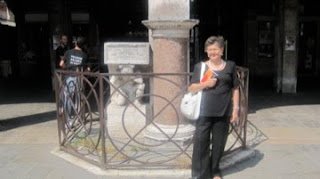