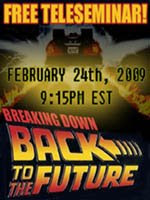 A great way to challenge yourself to be more creative is by asking yourself what if your hero or heroine could go back into their past, define and then change one thing that has prevented them from achieving their dream? How would your story change? You might find an amazing twist or an unexpected ending, like the one in the film, Back To The Future. In which Marty McFly hates his life because he is tarred with the same brush as his “loser” father George, who in the present is still being bullied by Biff, the same person who did so when his father was a school child. Marty blames his father George for his own failure as a musician. What happens to get the story started is that Marty has the chance to rearrange his future by getting sent back to the past.

While in the past, in order to make sure his parents to fall in love so that he can be conceived, Marty succeeds by getting his father to stand up against Biff. Because Marty has actually changed history, from having a father who’s a wimp, to one who is a hero, when he returns to the present, Marty discovers that his father has become the successful and confident man Marty always wanted him to be. Marty is then able to realize his own dream of playing his guitar at the prom. By allowing your character to actually change their history, it naturally changes their present and future.

I’m not suggesting that you actually use the idea of going back to the past in your script. Instead, take the idea as a game of the imagination where you borrow this concept as a process to help you improve and deepen your own original conception of your main character.

I teach writers to borrow a basic principle from Actor’s Craft, which is to think of ourselves as the primary character in their story. Stanislavski, the great acting teacher wrote “Behavior is Character.” If we understand what we would do in such a situation, we can then know what our characters would do.

Step 1. Ask yourself to think about the one major thing in your life that you would have like to have changed because you feel it has interfered with you achieving your goals in life. This could be a sports injury, a love affair, or something closer to Marty’s problem with his dad. If this hadn’t happened, where would you be today? How would your life be better or worse, the same or different?

Step 2. Now, set a timer for 15 minutes and writing as your character, create a monologue about what you, as the character, would have altered if you could have gone “Back To The Future.” Write out what actions you would have taken to change the past and then write about how your life (as the character) changed as a result. For example, if your character were Marty, you might have written, ” If only I could have changed my dad. So I went back to the past and found a way to change my father’ s life by getting him to fight the bully. As a result, my father has become more confident and successful and so have I.” It is helpful to go into a little more depth when you’re writing than I have in this example, but you get the idea.

By imagining how your main character wants to change his or her past, you will add depth to your character and improve your script.

P.S. Please join me for tomorrow night’s FREE screenwriting teleseminar “Analyzing Back to the Future with The Four Magic Questions of Screenwriting.”

How to Enter the Free Teleseminar: