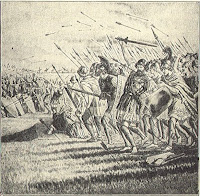 I arrived in Washington, DC for my seminar about The Four Magic Questions of Screenwriting this morning. There were a few other events going on in our nation’s capital today.

When I stepped off the train, the first thing I saw was a group of protesters making their way across Union Station, loudly chanting and carrying signs criticizing the president and health care reform.

Later, while I was driving to the seminar venue, I saw runners preparing for the city’s annual marathon. They were stretching, drinking water and, in many cases, quietly talking to themselves.

Even though both groups were in the city for different reasons, they were both equally passionate about their reasons. Both groups had spent time and energy to prepare for the respective events and traveled to be there.

As an exercise:
Consider these two events. Which one would your main character decide to attend? Would they be spectators or participants? What would they bring with them to help achieve their goal? Are they successful?

By taking a moment to think about what your characters believe in, you’ll learn more about them.