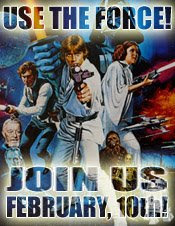 While preparing for tomorrow’s teleseminar, I found myself contemplating what makes a character who they are. When writing your story, a powerful way to get a handle on the soul of your characters is to consider the tools they use to get things done, whether it’s to find strength, get back to Kansas, or fight the Empire.

Popeye had spinach. Dorothy had the ruby slippers. And of course Luke had his lightsaber. We can think of their tool as a symbol that represents the essence of their character.

In my writing method, The Horowitz System®, we focus on developing character first. A core technique is to draw a simple stick figure picture of the hero or heroine and his or her family, and to attribute a symbolic object to each character.

In Star Wars, Luke’s parents are gone, so you might draw a stick figure of his aunt, a housewife, holding a pot, and his uncle, who is a farmer, riding a tractor or holding a pitchfork. Then you would draw Luke as a stick figure with his lightsaber. A question for pondering is whether to draw Darth Vader in that picture, as Luke does not yet know Vader is his father.

This technique often gives writers surprising insights into their main characters. Try it for your obstacle or villains as well!