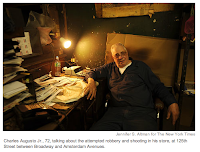 My student Lanie tried to take the bus home last night that goes down Columbus Avenue. But he was told by another driver that busses weren’t running on that route because an old shopkeeper shot and killed two of four robbers who assaulted his employee.

Because we’re always talking about genre in our neck of the woods, we decided that the story of an old man fighting back would have to be called Up noir.