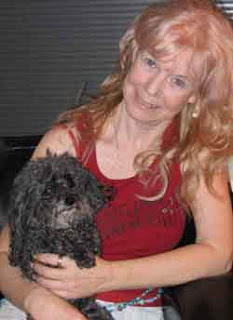 When I returned home from my recent vacation, I was feeling a little jaded in the story department. Were there any stories left to tell?

I went to the theater to see Les Liaisons dangereuses at a Sunday matinee, not expecting much. The play I was about to see had been done a thousand times. As I walked down 42nd Street towards the theater, everything advertised was a revival, a remake or a franchise or foreign films turned into American versions.

I sat in the second row, next to a high-powered New York couple. In the first row, a fragile looking blonde lady sat with an open bag on her lap. Inside the bag was a gray toy poodle sitting quietly. The man next to me noticed it, looked at me, and with a smile said, “A dog! If it barks, we’ll kill it, right?”

I laughed but secretly felt a little guilty.

Just before the show started, an usher came over and hassled the lady. I listened while she explained that this was a service dog, and she showed papers that seemed to placate the usher.
The show began and remarkably, the little dog never barked once. At the intermission I leaned forward, introduced myself, and asked her how the dog was of service. Jill, the woman’s name, introduced me to “Cookie” and explained that she had been in two near fatal car accidents and had suffered neurological damage that made her prone to blacking out. After the second accident she’d become agoraphobic and suffered from panic attacks. Her psychiatrist suggested that perhaps one of her three toy poodles could help her, acting as a kind of emotional seeing eye dog. Ideally, if she became unwell the dog would paw at her face, and if she did indeed black out, could bark loudly until help came. Of the three dogs, Cookie, the baby, turned out to be the most attuned.

After a difficult training period where Jill had to endure induced panic attacks so Cookie could be trained, the psychiatrist arranged for her to get the papers that allowed her to take the dog everywhere.

Since then, Jill has been able to travel frequently. She was recently in Tel Aviv and regularly commutes between New York and Los Angeles. And, so far, Jill has blacked out only once and, yes, Cookie’s barking was able to bring help.

I was inspired by the amazing way that Jill had managed to reinvent herself, and my faith in stories is back. Oh, and the play was pretty good, too.