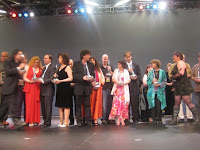 Hope you are well. Just another quick update from Montreal.

Went to a few panels about writing, submitting your material and The Hugo Awards. Interesting stuff. Heard a lot of things I had already considered but explained in very clear ways. Here’s a sample:

“90% of science fiction is about philosophy rather than science.”

“This book was a failure of character. Not that the character failed in his quest but rather that the author failed the character by making them do something they would NEVER do.”

See you next week.