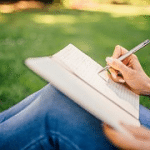 There are three steps to developing material concept first.  I always work with a timer set to 15 minutes and write by hand.  In each of the exercises below, allow yourself to go outside and beyond your story.

Step 1.  Trace the source of your original inspiration for the idea.  How did you come up with the idea?

For example, if your story was Midnight In Paris, you might write, “As a child I wished I had been born in another time, where life wasn’t so tough.  I was really angry when my friends made fun of me.  One day, when I was finally in Paris, I thought, what if I really could go back into the past and live that life?  I was torn between entering a traditional marriage or opting out to finish my novel: What would have happened to me if I had known the great writers of the 20s and 30s, or been mentored by someone like Gertrude Stein?”

Step 2.  Complete the “What Happened Was…” exercise.

Take a character from your screenplay. Now imagine that you are they, it’s 20 years later, the story in the film is over, and all of the events are resolved. As your character tell the story, starting with “What happened was…”

For example, if your script were Midnight In Paris, the hero, Gil, might write: “What happened was that I was in Paris about to get married, and I wanted to revisit the world of Paris in the 20s that I had wanted to live in as a child, and I had to chose between my future marriage and a magical chance to do so. I ended up not getting married, I discovered that I had talent as a novelist and met a lovely woman who may or not become my wife.”

The concept is the larger, human idea behind your screenplay story.  This is what inspires us to write stories but we rarely focus on articulating it.  For example, the concept behind the film, Midnight In Paris could be: Can going back to the past make you happy?  Which may remind you of another, well-loved movie, Back To The Future.

Completing exercises like this for your script will lead you to understand the concept behind your script and deepen your story. Ironically, by articulating this seemingly elusive element you should find an original, yet commercial “hook” that will help you successfully pitch the screenplay.