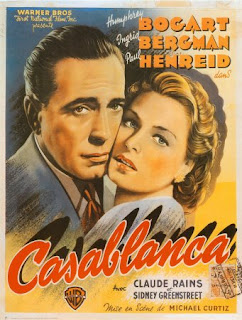 The first step is to return to the source material, whether it’s a book, magazine article, or an original idea. A subplot can be defined as a minor storyline that runs parallel to the main plot of the film and often comments, contrasts, or supports and expands the issues and themes raised by the main plot.

Often a romance serves as the subplot in a film, Casablanca being a good example of this. The main plot is about whether Rick (Humphrey Bogart) will help Viktor Laszlo (Paul Henreid), the resistance leader, escape from Casablanca; the subplot is about Rick’s love affair with Ilsa (Ingrid Bergman) and his discovery that she has left him for Laszlo. The subtext is about sacrificing personal passion to serve a higher purpose.

In ArtRage, the novel I mentioned in an earlier post, there are several important characters. One is the cop, one is a sexy female lawyer, Yolanda, and one is Case’s 17-year-old son, Nick. Since Mace is attracted to Yolanda in the book, what “if” we make her the “Ilsa” in our screenplay version? Again, we can “borrow” an idea, this time from Casablanca. What “if”—after Mace breaks out of jail—he goes to Yolanda and asks her to hide him? What “if” she tries to talk him into turning himself in, but he refuses? And what “if” the climactic scene is when she lures him to her apartment and the cop is waiting to arrest him?

The subplot also sometimes carries the story. In Witness, the subplot follows the love story between John Book (Harrison Ford) and Rachel (Kelly McGillis). It’s their feelings for each other that drive the story to its climax.

“Marilyn, It’s been an amazing year developing my script. Thank you for your mentorship and friendship.”

“Just wanted to say I read your book and think it’s terrific. You took a process that can seem overwhelming… Read more “Allison-Author 101 University”