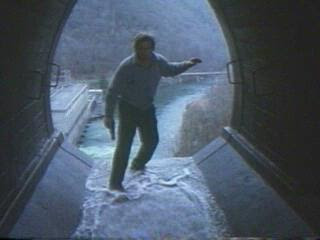 According to Constantine Stanislavski, subtext is the deeper and usually repressed meanings hidden in the hero’s or heroine’s dialogue and actions.  It is  what a character really feels, whether or not it matches what he or she is saying or doing.  Think of it as the hidden meaning in the scene.

The subtext in The Fugitive is that the Cop and the Robber are two sides of the same coin, and can’t exist without each other.  In the scene where Dr. Richard Kimble (Harrison Ford) escapes by leaping off the dam, Marshal Gerard (Tommy Lee Jones) has him cornered.  Kimble tries to explain to Gerard that he is innocent, but Gerard says, “I don’t care.”  Then Kimble jumps.  The subtext is that both men are doing what they must to see that justice is served.
Take a moment to examine your own screenplay.  Isolate a scene and try to determine what your characters are really feeling, despite what you have them saying and doing.